Back in 2013 I was diagnosed with rapid cycling bipolar II disorder and mood congruence.

For the uninitiated, bipolar is where you are lucky enough to have bouts of both depression and mania; rapid cycling means that you get at least four episodes of said depression or mania per year; and mood congruence is where you sometimes have delusions based on your mood (my go-to flavour is paranoia when I’m depressed [yum!]).

Bipolar is a lifelong illness, it’s a part of you, there is no cure; but, as my (excellent) doctor said “…think of it like diabetes, it’s dangerous yes but with medication and careful management you can lead a long and relatively normal life…”.

“Hooray! I have brain diabetes!”

I have been trying to write about this for a while now and will admit to being a bit overwhelmed. My mental health has been (and continues to be) a long journey so I am going to split it into a series of more manageable bite-sized blog posts. I’ll try and pop out at least one post a week.

If you can’t wait for the thrilling conclusion to the series (spoiler alert!) – I am really good at the moment, I’m in a great place. Since my diagnosis in 2013 I have had two kids (I love being a dad), my wife remains my ever patient rock and best friend, I have held down a good job for over five years without committing career-seppuku for the umpteenth time and I am (hopefully) making a difference doing youth mentoring in my local community.

OK, the scene is set – where to start?

I suppose at the beginning… [Next week – Ghost Grandma]

Three millennia,
Sixteen billion miles each day,
To fall upon my eye.
The vain queen bestows her gift
From her celestial throne.

I felt a wee bit sorry for the star V762 Cas. She held* the remarkable record of being the furthest star we could see from Earth with the naked eye but yet she got very little love, so I decided to write her a nice romantic tanka.

* I say “held”, past tense, as in 2007 they observed V762 Cas’ parallax (a figure used to calculate the distance) had become larger and therefore her distance was calculated as being much closer. She is no longer seen as being the furthest visible star. I still love her though.

Taken at the aquarium, my eldest was mesmerised by the Gentoo penguins. I took this photo hoping to capture how perfect her reflection was in the glass of the exhibit. What I love though is that the reflected image could almost be a window into her two year old mind, showing the scene that had so fascinated her.

I didn’t really expect my trusty ol’ iPhone 7 to do the shot justice at the time. I was wrong, the photograph even came up well in a modestly sized print. 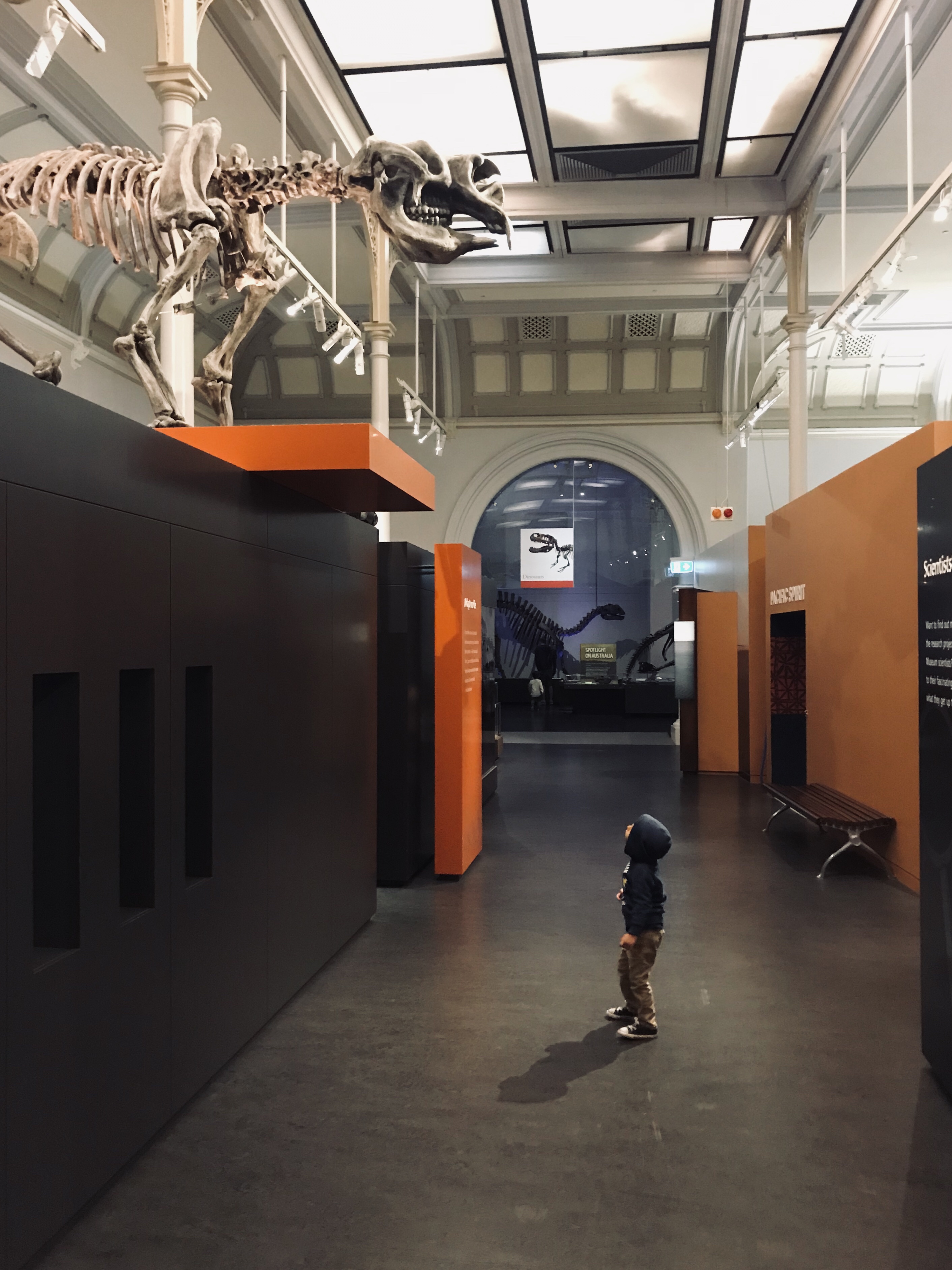 I love this photograph – the suddenly empty exhibition, the shadows, the way The Boy is transfixed by the diprotodon skeleton, the way it looks like its about to pounce on him…
there’s something very Stranger Things-esque about it.

I love a bit of haiku action! They are short enough to churn one out per day on the commute to work and they’re great for keeping the creative juices flowing when you haven’t got the time to sit down and write something meatier.

I really was not happy with The Cardinal when I first wrote it, but it has grown on me. Perhaps I’ve made peace with the allegory behind the poem perhaps it was just a grower, who knows?

Also, before some cleverclogs brings it up, I know – the pronoun used in The Cardinal is feminine whilst the description is of “ruby wings” and generally only male cardinals are red… lets just call it poetic licence shall we. 😉

N.B. Haiku by me but photo credited to a talented chap called R. Hammitt.

Note to reader: Whilst I am partial to a spot of poetry I have to admit I am not a fan of the rhyming couplet; that being said I did enjoy cobbling this together. It was written in style-matching reply to my BFF’s Dad’s poem Brexit or Bust just for a bit of fun really. A Remoaner’s Lament remains a work in progress, I’m not sure whether I care enough to finish it off.

…An unfinished mess, quite apt for a poem about Brexit.

My name is Cenydd… and I am a Cincinnati Bengals fan.

God it feels good to have that off my chest.

If you were not paying attention to the dumpster fire that was Cincinnati’s 2018 season, it did not go well for the Bengals. We were awful.

The familiar pain of being a Cinci fan was made worse this time round in that they gave us hope by winning 4 of their opening 5 games (“WOO YEAH WE’RE GOING TO THE SUPER BOWL!!”) and then crushed it whilst laughing in our faces, winning only another 2 all season (“We are so bad. F*** the Steelers, even the Browns are better than us!”).

So with 2018 done I removed all NFL links from Apple News to give myself a break. Absence makes the heart go fonder as the saying goes, and the heart would need to grow fonder to put myself through another season as a Bengals fan. Adding to the US sport news blackout I am also on a self-imposed social media vacation so, living in Australia, I really have been well and truly in the dark.

Until today that is. Desperate to see what’s been going on in free agent season I returned to the NFL news feeds and… what… the… fuck… ?

Joe Flacco to the Broncos?

Antonio Brown to the …Raiders??

Le-Veon Bell to the Je… wait that can’t be right… the Jets??

Whilst in Cinci we’re spending our time kicking our heels and re-signing our end-of-contract guys.

It’s good news that we are keeping C.J. Uzomah, a reported $18m deal is big money for a guy coming off his rookie contract but he’s a gun, I think he’ll be a great asset next year.

More questionable is that it looks like we’ve tied up the entire offensive line from last year – does that OL have the talent to buy Dalton enough space each and every down to recapture his 2015 form? They didn’t last year and I’m doubtful that will change, I think Dalton will find himself under a lot of pressure again and we all know – The Red Rifle struggles under pressure.

Most concerningly though, at the time of writing, we still haven’t tied up Darqueze Dennard. Letting him slip through our fingers will be a huge mistake, we have nobody on the roster that can do what he does and it will cost a small (…large) fortune to bring someone in of his calibre.

The Bengals are looking after the bottom line, playing it safe, which is admirable from an accounting perspective. However safe doesn’t win championships and the team we had last season certainly won’t.

It’s very early to get the wobbles but I worry if we’re not making moves with this much talent in the free agent pool and potentially letting one of our biggest talents go it’s not going to be the opposition that beats us in 2019 – it’s going to be our own lack of ambition.

Cincinnati unexpectedly brought back their slot ace on a one-year deal last week. The secondary is stacked, proving to be a sage strategy for the Bengals going forward.